National Economic Council Director Gary Cohn is resigning from President Donald Trump’s administration over the tariffs that are being imposed on steel and aluminum. The immediate result was that Dow (SIA) and S&P 500 (SPY) futures got crushed in the aftermarket. We’ll see what it looks like tomorrow.

Here’s why Cohn leaving is really important to me. He’s a stock market guy from Goldman Sachs (GS). He’s a globalist that realizes that America makes a lot of money being global. Now, I will say, I’m not so sure he doesn’t want it all for himself and his buddies, but nonetheless, the problem with globalism isn’t the global, it’s the “ism” as in 1%ism.

So, without the globalist stock market guy in the White House, there’s more concern about a potential trade war and what the Fed might be up to in the next few years. I talked about this stuff in these two articles:

Macro Monday: Will Protectionism Be Different This Time?

I think it is very important to think that maybe, just maybe, these guys trying to run the economy are the types who drank so much of their own Kool-Aid and they just don’t understand how the economic machine works. Here’s how it works in case you missed it:

It’s my opinion, that we shouldn’t normalize the monetary conditions much. Just a little to feel good. But this whole buying back the Fed balance sheet over anything less than a few decades and raising interest rates to normal rates, i.e. 5%ish on the 10-year Treasury, is insane to me.

So, let’s dive into the inflationary forces right now. First off, the global economy is growing okay again. Nothing spectacular, but pretty good. It’s still fragile because, once again, as I’ve said, we have “slow growth forever.” Read all about it here:

There is a lot of money that has been borrowed against the future. The “QE” that nobody understands wasn’t really money printing, but money borrowing. That money is in the system and it is inflationary as it moves. That is, when velocity of money rises, we get inflation. If the money doesn’t move, then we don’t notice that by definition of having more money there is inflation.

“Inflation is always and everywhere a monetary phenomenon.”

This next part gets left off usually, but it’s why we pretty much always increase the money supply:

“A steady rate of monetary growth at a moderate level can provide a framework under which a country can have little inflation and much growth. It will not produce perfect stability; it will not produce heaven on earth; but it can make an important contribution to a stable economic society.”

I post that so all the “fiat money” screamers will shut up or at least know I will “come at’em bro” in the comments. Really, I post it so that folks understand that as population increases and we want higher standards of living through economic development, we ought to increase the money supply a bit over time. It’s really pretty simple in its imperfection and necessity.

So, we have more money, but inflation has been stubbornly low. Why? Because the money hasn’t been moving very fast.

So, inflation and deflation are at logger heads and will be for a very long time.

Here’s what we have to avoid. We have to avoid slowing growth even more with knucklehead economic policy. Tariffs are knuckleheadery if really implemented in any large scale way. I warned about this in the last to Macro Monday’s.

Here’s what we really need to be afraid of: stagflation. The borrowed money won’t go away. So, there is going to be inflationary pressure. If tariffs simultaneously raise the price of goods and slow economic growth, we could see a negative GDP quarter by next year with inflation rising.

If that happens, the one thing that could save us, like it did in 2015-16 in my opinion, would be really low oil prices. But, if shale is hard to get to market due to the increased cost of building infrastructure, well, then how do we get really cheap oil? Quite a worm in that apple.

Subscribers to Margin of Safety Investing have a few hedges on. Small ones, but they make some sense in light of rising volatility and questionable economic policy that could bring about bad outcomes. 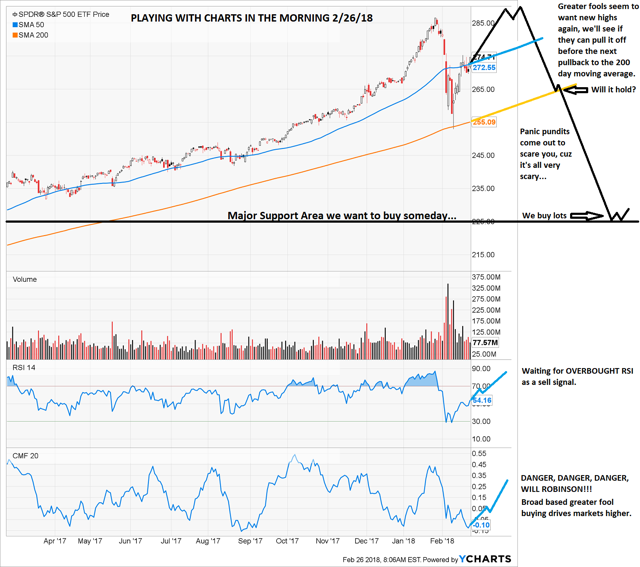 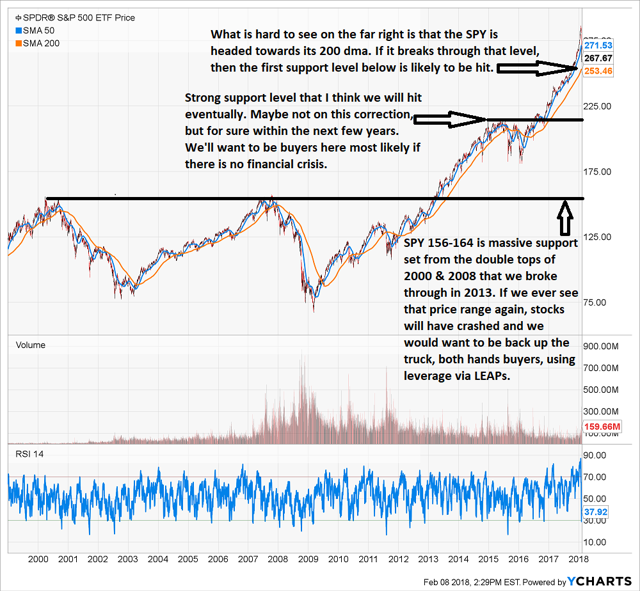 We have other puts on certain European ETFs. Why Europe? Because they are not the land of cheap stocks people are talking about. I agree with Ray Dalio that they are hurt a lot in an economic slowdown, especially one that is stagflationary even in a minor way. Take a look at these Bloomberg articles for a primer and two takes. I’ll have more eventually, though am constrained to keeping the best stuff in house.

For subscribers, I plan to close my option positions in the next week or two, depending on downward momentum. I might take profits tomorrow if I have some.

While I am getting increasingly negative on the markets, the reality is that the buyback bubble is keeping the stock market up. There is somewhere between $800 billion and a trillion in buybacks coming to the S&P 500 this year. So, I am inclined to shift my domestic hedge to the small caps which do not benefit from inflation or a slower economy. Generally, pre-recession, small caps get hammered. I’ll look for rallies to buy puts during.