I know some folks are skeptical of U.S. foriegn policy. That’s understandable. Anything that is imperfect is easy to criticize. And, everything is imperfect.

I take the view that America is a mostly benevolent influencer of global policy. We use economics, diplomacy and the military to push our view of the way the world should be.

In most cases, our view of how the world ought to be, is right or close to right. America is the “first new nation.” We believe in liberty, equality of opportunity, individualism, separation of church and state, republicanism, democracy, and capitalist economics with conscience.

So, take the pot shots. Point out profiteering by greedy folks who play the system. Expose when the military oversteps or makes a tragic mistake. Call to account any politician on the take. But, never forget, nor doubt, that America has been a force for good and that should always be our role in the world.

The Iranian government, particularly the religious leaders and specifically the Ayatollah, have been unquestionably the biggest supporters of terrorism globally for a very long time. Anybody who wants to deny that can argue with the CIA or any reputable think tank.

Iran’s Support for Terrorism in the Middle East

Since the Islamist revolution, the nation has devolved into a state sponsor of terrorism. The Ayatollah has meddled in politics far more than the previous Supreme Leader and torn down many of the institutions that made Iran a likely place for democracy and freedom to thrive. He has instituted an essential police state.

Remember, Iran is a nation with a large young educated population, an entrenched kind politeness and a proud impressive history. Any policy should have at its heart the goal of helping them take back their country.

12 Things You Didn’t Know About Iran

What Iran has devolved into is heartbreaking. Many hope that when the Ayatollah dies, that there is a return to separation of mosque and state.

Religion and Politics in Iran

For background on Iran, here is a great summary from Politico that fairly outlines what went wrong in Iran.

The 12 people and things that ruined Iran

The Iranian government has supported anti-Israel militias and terrorist groups, backed a proxy war against Saudi Arabia in Yemen, sent troops to support Assad in Syria, incurred into Iraq, recruited and supported terrorists in Pakistan and Afghanistan, continue to support Hezbollah and appear to have been the backing behind the disaffected Saudis who attacked the United States on 9/11.

The Iranian Revolutionary Guard Corps [IRGC] have become the defacto overlords in Iran and have been active in Yemen, Iraq and Syria. The group has provided money and training to militant Shia groups in Bahrain and apparently Morocco.

“Iran’s foreign ministry denied Moroccan allegations that it delivered weapons to the Algerian-backed Polisario Front, a Sahrawi rebel national liberation movement seeking independence in the disputed Western Sahara, The Daily Star reported May 2. Morocco cut diplomatic ties with Iran on May 1, including closing its embassy and recalling its ambassador, after discovering a recent weapons shipment was sent via an element at the Iranian embassy in Algiers.”

There is also a list of tragic events that has ties to Iran’s support for terrorism.  The Iranian people deserve better than a government that promotes a cult like obsession with promoting a view that only war can result from.

Iranian People are demanding: “Regime Change in Iran is the Only Solution”

We should help them make that change.

The Impact of Sanctions

This is a very simple equation on why President Trump should sanction Iran again and defacto end the nuclear deal. By imposing sanctions on Iran, that will start to dramatically reduce their ability to export oil and gas within months.

That will have two impacts. First, the ability to support terror and their own military will decrease. This is important as it reduces their ability to expand their influence and engage in or promote violent acts. The danger is that there is one last violent thrust.

The second impact is more subtle. The government will face economic pressure that impact the people. We have already seen people take to the streets just a few months ago largely over economic grievances. Will they tolerate a government that is such a bad global actor that it hampers their own standards of living? I doubt it.

Clearly in the past 9 years there have been rumblings of change in Iran. The day could come quicker than many anticipate the Iranian people step up again.

Ultimately, sanctions create a one-two punch that is likely to be effective. The key is supporting and befriending the Iranian people when the time comes.

Here’s the rub. Oil prices higher than about $80 per barrel become a detriment to the economy, even if some players make boatloads of money. President Trump is likely mindful of that. There is little to make me believe he wants to see $100 plus oil. Here’s where another “deal” comes into play.

Saudi Arabia has about 2-3 million barrels of oil that it can relatively quickly add to global oil supply when called upon. It was their flooding of oil to the markets in 2014 that drove oil prices down and likely forestalled at least a small recession.

I have covered the interrelationships of America, Russia, Saudi Arabia and Iran before. The short story is that Russia hates the Ayatollah too and doesn’t mind higher oil prices as long as it does not cause a recession. This is important since it will play a role in Russia taking its time to “evaluate” what to do when the critical moments happen, i.e. they’re going to let the Ayatollah fall.

Is This ‘The Calm Before The Storm’ On Iran And Oil?

So, it is likely to me that we do indeed find a Goldilocks of oil in the $80-100 range when Iran’s supply starts to come off. There won’t be $300 oil or even $150 oil. Those are hype headlines to get attention and sell newsletters. Even if oil surged to $150 per barrel for a moment, it would only be a moment as Saudi Arabia and the other Gulf Cooperation Council members would pledge more production, the U.S. sold off strategic reserves and other investment was announced (Venezuela maybe).

When that supply comes back, we will see the price drift down, but not much. Ultimately, the price of oil does not head back to the current levels until electric and hybrid vehicles really start to take market share, as I have shown by this EIA chart I expanded upon: 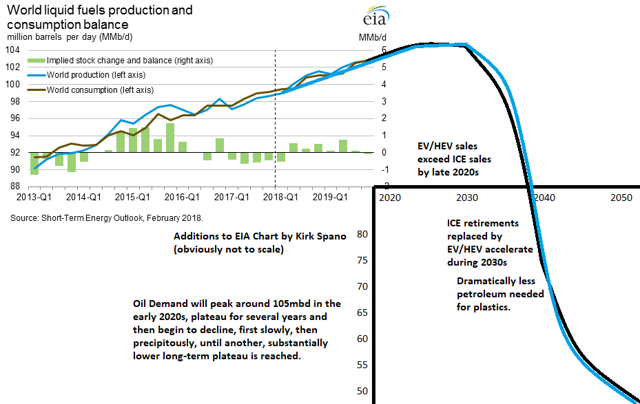 You can find more of my thoughts on the eventual growth of the EV and hybrid markets here:

What’s An Investor To Do?

I have been pounding the table for investors to increase their asset allocation to oil stocks. I offered suggestions in several recent articles.

Oil At The Doorstep Of $80/Barrel

The New ‘Golden Age’ For Oil Stocks Is About To Begin

A corollary to adding oil exposure is to reduce exposure to certain industries that thrive on lower oil prices. One such place flying under the radar for people are the oil refineries.

As oil prices rise, the margins that refiners can make start to decrease. I removed Phillips 66 (PSX) from the Margin of Safety “Very Short List” of stocks that can lead in the next decade a few months ago, and I am removing Andeavor (ANDV) now after the huge move up and the announcement of a buyout by Marathon Petroleum (MPC). I don’t want refiners anymore, they’re run is almost done.