For several years, the rumor and hype have been that the “Petrodollar” is on its last legs. That could well be true with oil demand set to fall dramatically in the 2030s. However, between now and then, the ties between the U.S. and Saudi Arabia are likely to be very symbiotic.

Expect the following in the not too distant future:

Covid supports, coming post-Covid stimulus and an eventual infrastructure plan to rebuild America have put the U.S. in a spot where it needs financing beyond what the Fed can provide through debt monetization.

Luke Gromen’s Tree Rings had a good find a couple weeks ago in Hoisington Management Quarterly Review and Outlook, 4q20. In their report, they show just how much financing America needs in the short-term. 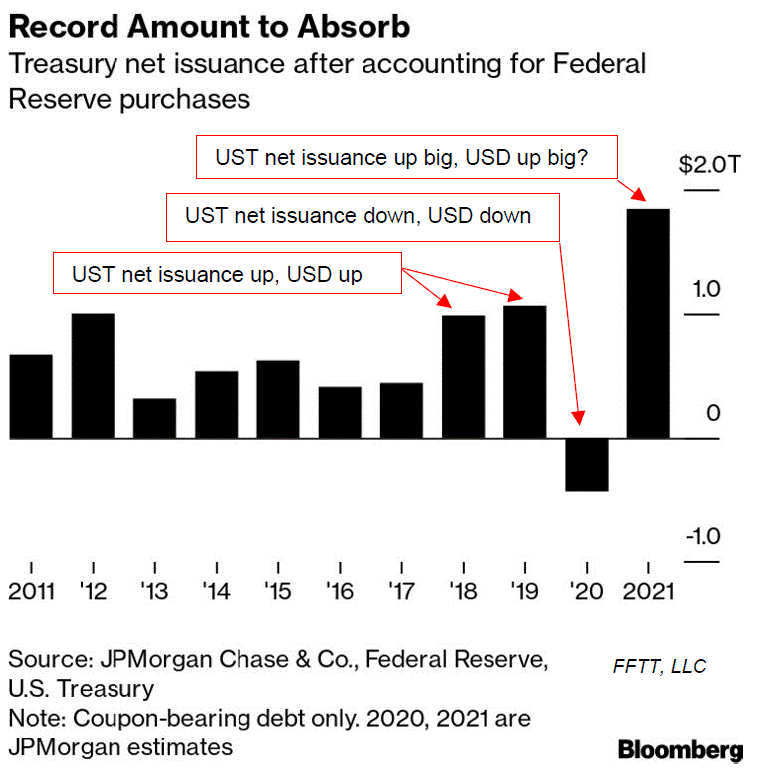 This is not lost on me as I have shown the great disparity between U.S. debt accumulation versus growth generated since the financial crisis on several occasions. Most recently in this chart:

The hope is that the stimulus plans of 2021 will generate more growth than the debt created. We’ll see if that happens, but in the short-term, there needs to be a way to finance that debt, which will be more than the Hoisington projection given there will be some sort of infrastructure bill later this year.

A New Deal With Saudi Arabia

The 1979 United States-Saudi Arabian Joint Commission on Economic Cooperation fortified the dollar (USO) as the currency of international exchange and the defacto reserve currency. Expect more cooperation given the needs of both nations.

Saudi Arabia needs to be close to the U.S. as a way to at least project some strength with Iran. It also needs to buy weapons. While that might harken to the transactional nature of President Trump’s policies, there’s quite a bit more in play here.

Saudi Arabia wants to transition its economy away from almost purely based on fossil fuels by 2030. I have made the point repeatedly for several years that is about when oil demand will fall after being on the “peak oil plateau” for a good part of the 2020s.

Saudi Arabia is a shrewd investor. They know, like Warren Buffett does, that investing in America is a smart bet. During the Trump administration, Saudi Arabia nearly doubled ownership of U.S. Treasuries to over $180 billion by early 2020, only to see holdings plummet throughout the year as falling oil revenues put pressure on their budget.

With the U.S. need to finance an economic recovery, which, as usual, will lead or co-lead the world’s economic recovery, the Saudis have a chance to invest in the future of that recovery and America’s long-term economic strength. It also helps them finance their future transition from the current near total reliance on fossil fuels.

To wit, the calls have already been made about how things might work out.

With U.S. Secretary of State Blinken pushing foriegn policy and Treasury Secretary Yellen in need of foriegn investment, there is certainly a deal to be made that is mutually beneficial beyond a transaction. Rather, we should expect a long-term impact on Middle East policy and the dollar’s reserve status as Saudi Arabia recycles Petrodollars into U.S. debt and eventually a Cryptodollar (which I have been discussing in webinars and will discuss next Monday in print).

President Biden, by executive orders, has already put holds on future oil development on U.S. public lands and offshore, as well as, restricted Canadian imports by canceling the Keystone XL Pipeline extension. This creates two opportunities for the Administration to finance its budgets.

The first we have discussed above. The fallback if Saudi Arabia doesn’t play ball, is to simply enact a carbon tax and let the U.S. fracking industry off the leash for a few years. That second outcome is not what President Biden wants to do (he’d rather have the carbon tax without expanding U.S. fracking), but it presents enough leverage for negotiating with Saudi Arabia, along with foriegn policy pressure.

The EIA in its latest STEO projects minor draws from oil inventory this year and next with oil prices around $60 per barrel. This should be viewed in the context that:

The overall message for oil bulls is that the rebound in price was just that, a rebound. Not an end of the secular trend that began 5 years ago and should properly be known as the “end of the oil age.”

Millennial traders will get to know the pain that crummy investment vehicles like the U.S. Oil fund (USO) can inflict. What is contango?

And, equity traders who have bid up oil stocks indiscriminately will feel pain too as only a few long-term winners will emerge. ETFs like the SPDR Select Energy (XLE), and even more so the SPDR Oil & Gas E&P ETF (XOP) along with about half of the components, are in big trouble as OPEC+ production ramps up.

If investors want to invest in positive outcomes from the oil industry, then they should be looking to invest in the Middle East.