My intention was for a quick “Quick Thoughts” but after just writing the bullet points I can tell it might not work out that way. I’ll try to be quick on a nice Wednesday afternoon that I know for a lot of people is part of a short week going into the pre-eclipse weekend.

I too will be starting a vacation on Saturday afternoon. Sort of. It’s rare I don’t work a couple hours per day on vacation. But, the end of August is when I’ve been taking my “big vacation” for about a decade now, so I thought I’d let you know.

My itinerary is pretty flexible, but I’ll be starting with a night watching Packers preseason football with the girlfriend who loves football (cool huh). Then Sunday morning we’ll set out, with a friend too, on our way to St. Louis to visit other friends for the Monday eclipse. Then it’s back to MKE to drop my girlfriend back for work (she couldn’t get the time off for the long part of the trip).

From the 22nd to 31st of August, I’ll be doing what my buddy and I are calling the “Hall of Fame Tour.” We’ll be hitting the Football, Baseball and Rock & Roll Halls before spending times camping in the New Hampshire White Mountains where my internet connectivity is suspect.

Hall of Fame Tour is a renaming. Most years I do what I call a “Freedom Tour.” When my kids were smaller that included trips to South Dakota, Texas, Arizona, Iowa, Cleveland and most of the eastern seaboard. Our first trip was to South Dakota for Mt. Rushmore and everything surrounding and other trips included Independence Day fireworks on the Mall in Washington D.C. and the Back Bay of Boston.

Why do I tell you this. Two reasons. So you know the content might be a little light (though I’m stockpiling) and because you really ought to make sure to do enough fun stuff. Unfortunately, I’ve had more reminders that life is finite this year, I’m sure you have too.

From a very emotional statement to talking about emotional control. How’s that for a seque?

I recently posted an article titled “Control Your Emotions, Direct Your Thoughts, Ordain Your Destiny.” I don’t know if the stocks mentioned matter much to your portfolios, but the ideas and the processes should.

When we invest, we have to make sure that we are as unemotional as possible. We are not looking for self-validation. We are trying to make money (that’s validation enough).

The best ways to control our emotions with investing are to know what we are investing in, i.e. learn the companies, and have a trading plan. My articles are geared towards probative questions, not backwards looks at data that could mean different things. As important as data is, I want to know about the businesses, their management and their outlooks. That’s the most vital analysis because it’s forward looking. That outlook takes a lot of work.

Trading or accumulating positions is a universal problem for investors. To that end, I have two thoughts here.

Look for Reversals for the Big Money

Reversals are different things to different traders. Day-traders move purely off of very short-term quant and technical signals. I know some excellent day traders, but it’s not for me. Most day-traders can’t hang, lose money and give-up less well-off for the experience.

Swing traders, the good ones anyway, trade primarily binary events: earnings announcements, sales numbers, regulatory events, strategic announcements and others, and are very good at it. For those of you with some options background, we will be doing a handful of swing trades per year. The thing to accept is that there just aren’t a lot of great set-ups. There is one potentially coming in Exact Sciences later this year if the stock price cooperates and consolidates for a few months as I hope. SuperValue could be one too. I’ll talk about both soon.

The easiest trades are the position trades which last for a year or more. Most of what I do are position trades. I own a lot of positions for 2 to 4 years. Exact Sciences I’ve owned to varying degrees 9 years and twice made over 1000% on it in 18 month time frames.

To set up a great position trade we want to do two things well. First, we need to assess the intermediate term outlook for the company and determine if we are near prices that give us value. If we are at value prices, then we want to use trend following reversal signals to stake out trades for accumulating near the reversal point.

We’ll never get it perfect, but the quant and technical signals I use are pretty good. Take a look at yesterday’s “Some Charts For “Very Short List” Stocks” which I showed a pair of CTL charts which indicated a long-term capitulation was occurring in that stock. That’s when we look to enter. (I nibbled a bit more of CTL yesterday again. I’ll put out a few more potential cash-secured put trades Saturday before I go, one will be for CTL.)

Looking for long-term reversals is where I generally try to get my first and second, and sometimes third entry trades into a position. Usually, I end up with a pretty good low cost basis. Using the cash-secured puts is a great tool here, so make sure to learn about those at the CBOE learning center.

A lot of investors look at trend following as market timing or flat out voodoo. Nothing could be further from the truth. But, I admit, I was a skeptic a very long time because the financial industry vilified these ideas for a long time, they still mostly do. The sales driven financial industry, even if they wrap themselves in fee-based planning services now, is about moving product, not getting results. I learned that in over a decade as a broker and more years as a fee-based planner.

Folks using firms like Edward Jones, Ameriprise, Primerica, Merrill or any of the bank attached firms are just lining up to get crushed again eventually. Why? Because when the next downturn comes, they’ll ride it down again, rather than getting out of the way. I don’t have the tolerance to do that. I sidestepped three crashes – tech wreck, financial crisis and oil crash – but the first two couldn’t make money on because of pressure from the brokerage. It’s just a crap system.

The trend following epiphany came to me in 2007. I knew of some technical trading my whole career. And quant started to pop up in the 2000s to me. But it was 2007 when a few traders started showing the breakdown in the market near the end of the year that caught my attention.

I knew the market was overvalued in 2006, but it kept going up as I started to tell people to sell. I gave up buying people steaks in the spring of 2008 because almost nobody listened to me as I told them the market was set up for a crash. (Several became clients around 2010 because they wanted my help to make their money back.)

The trend followers though by early 2008 were saying pretty convincingly that the uptrend was broken. I was already half cash and getting flack from my brokerage for it. By summer 2008, some of these trend followers were establishing short positions. My brokerage wouldn’t let me.

My point here is that following the trend carries some merit. It allows us to get better entries and exits. Clearly I started selling too early in spring 2006. I could have rode that bull all the way up until late 2007. Remember, markets can remain irrational a long time.

So, that brings me to today. Here’s some charts from a service I use: 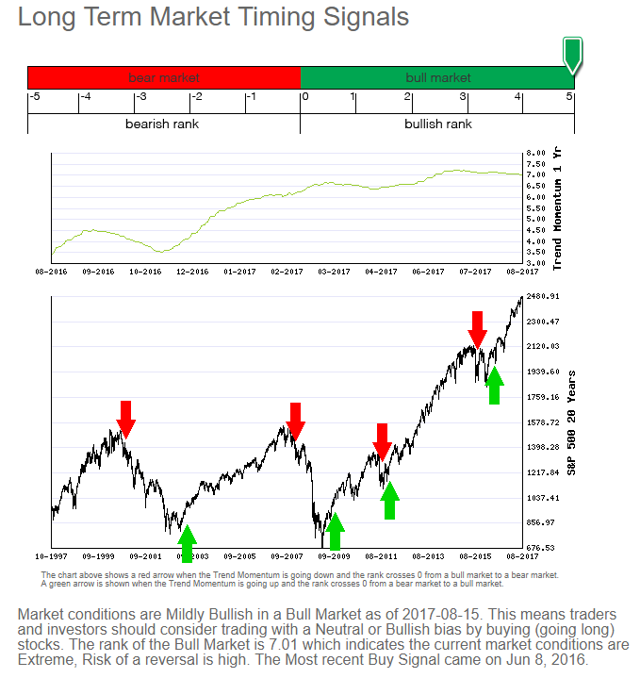 Yes, it’s called “market timing signals,” but it’s a quant system that measures different factors including one of my favorites, cash flow into and out of assets. What we see here is that we are in fact near the end of the current bull market. But, how near? Days, weeks, months or years? 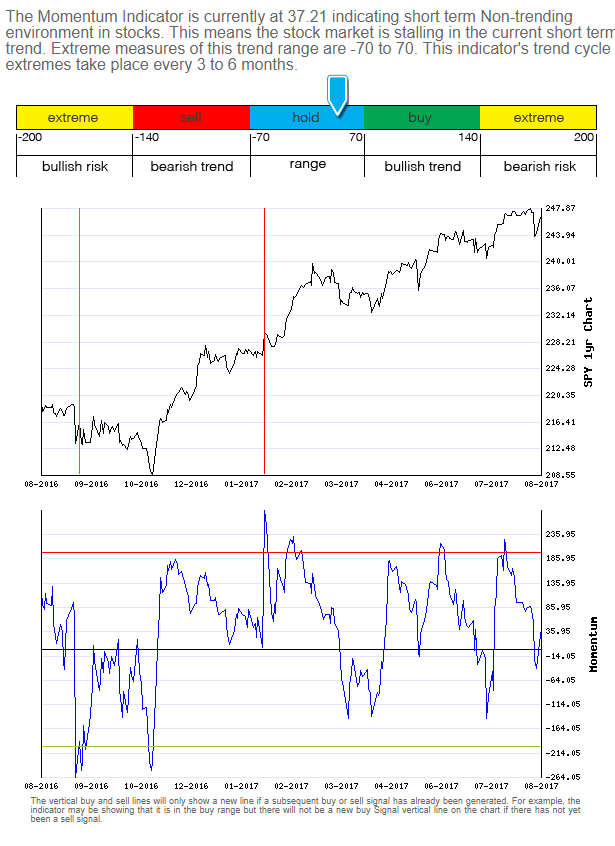 This means very little reason to change a moderately bullish stance that I have. 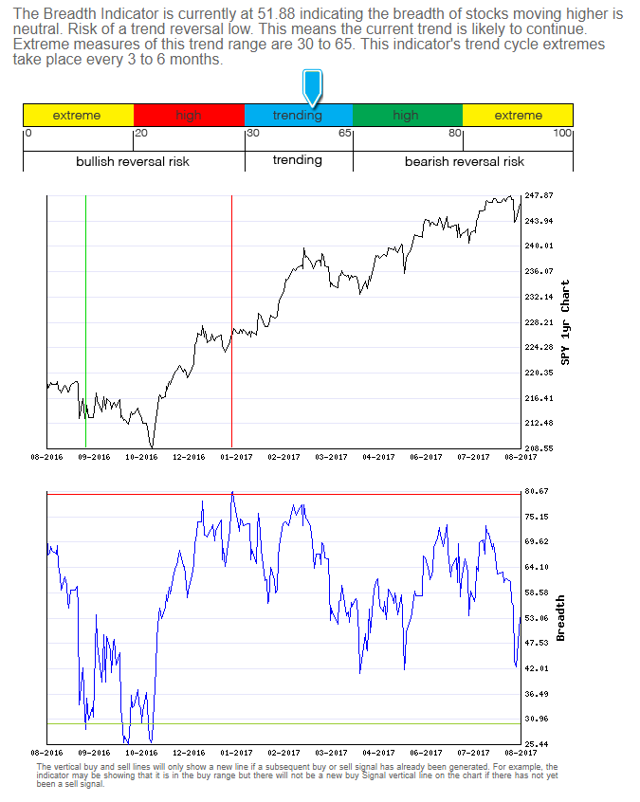 This also means not to jump the gun on becoming bearish. Though the trend here has been right to left, which is negative. 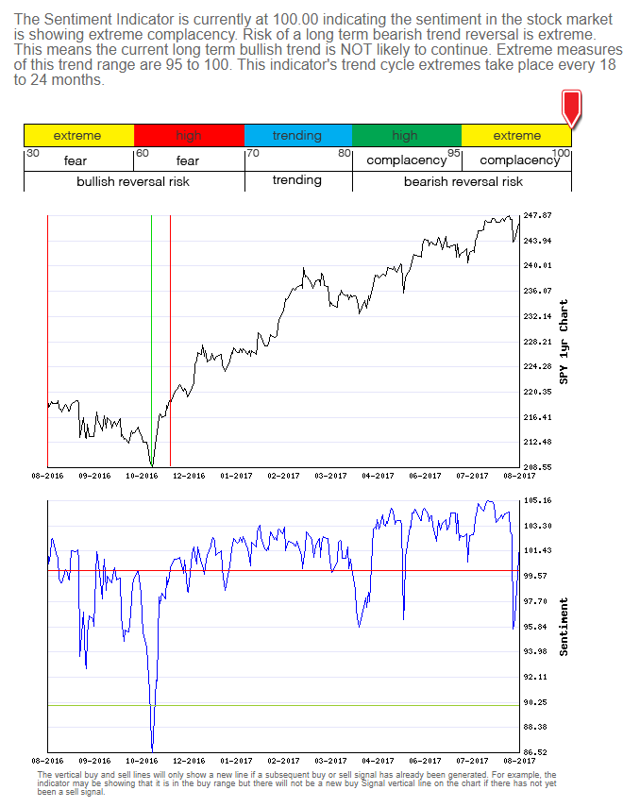 This is the big warning sign. Sentiment is very high right now and that usually doesn’t end well. However, it seems it will take quite a shock to the system to reverse this. What could the shock be? Hard to know.

If I had to make a prediction, I’d say we get a small correction here, maybe a flash crash, that we recover very quickly from. Goldman Sachs is saying something very similar to that. That means we want to buy the next dip as we wait for the bubbles to finish blowing – they’re not, see my article tomorrow on the free side.

Ultimately, recessions and bear markets are almost always (8 of last 10) tied to higher oil prices. Let’s keep one eye on that at all times. If we get a war in the Middle East that disrupts oil supply, that would be a warning that a recession was coming. I believe that a war involving Iran is imminent, within the next few years, quite possibly by late winter. I’ll expand on that again soon, but for now, review “Missing Risk Premium Could Lead To Oil Price Shock.“

Bottom line, the trends don’t say bail on the stock market yet, but do say you should be accumulating some cash as we go now. I’m at about 25% cash because the downside that a black swan – some unknown event – carries right now, from these high market valuations, is significant.

If you haven’t read “How I Prepared For A Flash Crash In An Overvalued Market” please take a look.