Remember when I wrote this?

A lot of people called me a stupid, ignorant, war mongering joke of an analyst. Pretty much every way I could be wrong, I was wrong. Well…

What Most Outsiders Had Been Missing About the Situation in Iran

US, Iran in war of words as deadly protests rage on

Trump’s Iran opportunity — give the mullahs a push

In that article from Time, they say the “nuclear deal will probably survive 2018, but there’s a substantial chance that it won’t.” Let me take the under on that one. I’ll rephrase it this way: “…the nuclear deal is unlikely to survive 2018 and there’s a substantial chance that a broader conflict breaks out disrupting oil supply.”

So, the last time I said Iran could have a problem I was stupid, etc… What will they call me later this week when I write “Bang! Bang! Iran Conflict Might Have Just Begun?”

There are about 30 new subscribers in the past few days, to get up to date on my thoughts on oil, read these please. For everybody else, a quick review probably makes sense:

Oil’s Technical Path To $80 Per Barrel

The Futility Of Forecasts And My Forecast For 2018

That Futility piece wasn’t read very much, but it’s an important piece. Very important. The world is coming out of a low volatility period and using the Macro aspect of our Core 4 Investing Process is going to be very important in coming years.

Let me quick about this, you need to have an overweight to energy stocks, in particular oil.

I like selling the Encana $14 February puts for about 80¢ and buying the $15 January 2019 LEAPs for about $1.60. So, you’ll have to sell twice as many puts as you buy LEAPs to have no out of pocket cost. Remember, you might end up owning ECA at $14 per share. We’re okay with that.

That basket of oil stocks is pretty good. I talked about that fund compared to the SPDR Select Energy ETF (XLE) back in July:

This cold snap is going to drive natural gas prices higher. Inventories were already turning over: 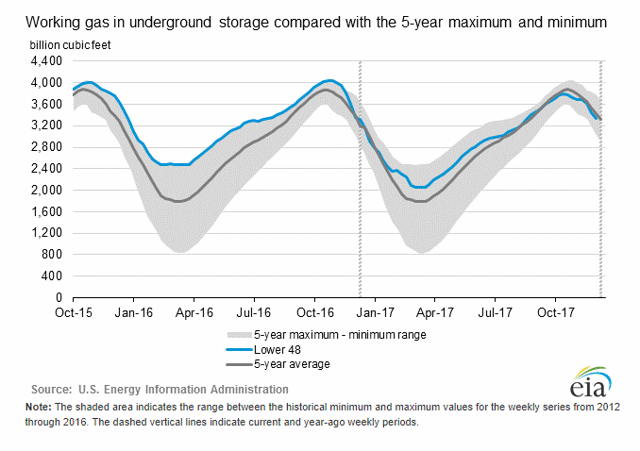 My favorite natural gas play is Antero (AR). Love it, own it, cuddle with it. They are cash flow positive and as the eastern part of the country gets colder their share price will get warmer. You can buy the shares, sell at the money puts and buy calls.

Buying ECA, AR and XOP gives you a very good spread on oil and gas stocks. I like that grouping a lot, it’s what I have along with XES, OXY, KMI and AMLP in my portfolios. I am a bit over 25% to this group of holdings right now. That’s 4x the S&P 500 weighting to energy. If I weren’t a registered person subject to regulatory oversight AND I was an aggressive investor, I’d be up between 35-50% in energy right now. That’s a risky proposition, but could be a big winner in 2018. A quarter to energy is fine for most folks though because getting greedy usually ends badly.

For those of you new to MOSI, you might not know that Exact Sciences (EXAS) has twice been a home run for me. I originally invested in the $3 range about a decade ago and then loaded up at $1.65. I eventually added a couple tranches of LEAPs before the FDA and CMS approvals years later. The result for early investors and those using options was more than a ten-bagger.

After taking profits when the stock first hit about $30, I started buying back in around $20. The stock plunged though on an ambiguous USPSTF statement that was put out by a political opponent of the Affordable Care Act. With the stock in single digits I backed up the truck on shares and LEAPs.

After the chair of USPSTF was replaced in unusual fashion and the USPSTF clarified their language to make it clear, the stock began it’s ascent that recently stalled, reaching a high of $63.60. Almost right at the top, I advised people to take profits and pair back their Exact position to a normal sized position of 2% to 4% of their portfolio.

There are two gaps that Exact might fill in the short-term. The first, around $51, has already filled and been bounced off of twice. That is a good sign. 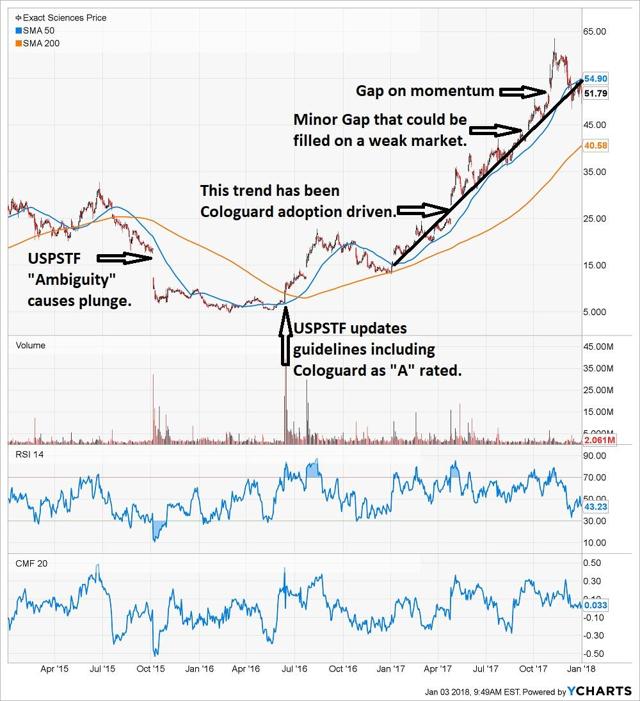 That second minor gap could get filled. It would require a weak market or some sort of minor disappointment from Exact in my opinion. The trend up for this stock is very, very strong. It is supported by Cologuard adoption for now, but soon will have other catalysts. Cologuard adoption by the way is still way underestimated by analysts, so, there will be beats for quite a while yet.

As I’ve mentioned a few times now, not only will Exact start to develop a few new products for several years down the road, but they will in all likelihood sell some of their pipeline for the cash needed to develop what they keep for themselves. We already know they are great at partnerships, so there’s more of that developing I’m sure as well.

There is the J.P. Morgan Healthcare Conference next week, so I’m sure the company will put out some more details about Cologuard adoption and the pipeline. If you do not own Exact, I suggest either buying shares in the lower $50s or selling cash-secured puts. If the stock does fall to lower $40s, be ready to add more. I think the high side of my 2-4 year price target of $100-200 is most likely for EXAS shares.

Technology IS the Past, Present and Future

Technology advances are what changes the world. The steam engine, the light bulb, cars, computers, the internet, cell phones… the list is massive. As we become smarter or at least more ambitious, we find ways to have more and more done with technology.

Today, we are at the edge of another huge shift in technology. Artificial Intelligence, Augmented Reality, Virtual Reality and everything the the “smart” IoT can bring is about to change the world again. As I said back on Thanksgiving:

The biggest opportunities coming are in smart everything. IoT, AI, AR, VR and alternative energy with a smart grid that powers smart electric vehicles. We’re even going to see a tech based solution to methane and CO2 that churns out plastics without using petroleum. What’s coming is amazing and it’s only a few years away.

(note: it’s always sort of weird fun to quote yourself)

We need to be invested in technology. If we are not, then our portfolios will languish. Not only do we want to find some cutting edge young companies, but we want to own the “pick and shovel” companies as well. Supporting the “smart everything” economy will require a lot of DRAM!

So, that’s a shout out to Eric S who I had a long conversation with yesterday. He’s a subscriber and engineer who used to work at Intel and is still in tech. His experience and expertise is extremely valuable to us.

We talked about Micron (MU) and the entire memory/storage complex for computing. I have been touting Intel (INTC) as a growth and income pick on dips, but Micron is probably better for overall returns, at least for the near term as DRAM pricing, which is run by the oligopoly of Micron, Samsung and SK Hynix is very firm and shows few signs of falling off.

Here is something that Eric sent me:

Micron and Intel are “pick and shovel” companies for tech. Micron probably has another good run in it coming as it pays down debt and business remains firm. For the aggressive investor, Micron looks like a buy in the lower $40s. This looks like consolidation with a double bottom and the next earnings could be very good – setting up the next rally.

Be careful in sizing as the stock could head down to the 200-day moving average on breaking market price trends. If it went below the 200-day I’d be surprised, but if it it does, that means there was bad news about the company.

Intel doesn’t seem to want to drop below its 50-day moving average and really does appear to be breaking out. However, as Eric pointed out and I agree, the company has a hard time moving the needle because it is so big. It’s a stock for folks not looking for a homerun, but rather a big company with a good dividend that will grow with the tech space. That’s not a bad thing to have because tech is a growth leader.