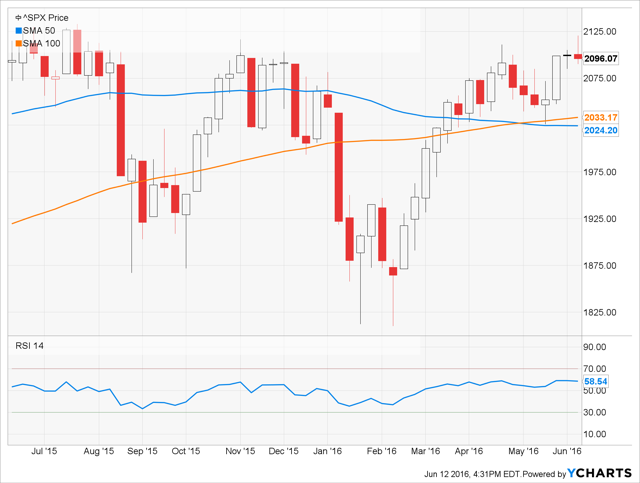 This week, the S&P 500 did break 2100 which was a technical level I indicated it needed to hit and hold on the week to indicate a breakout to new highs. However, just as the index rose, the index pulled back with significance on Friday. Hugely interesting is that it nearly hit the tight support of 2085 that I also mentioned earlier in the week. So, on Friday, the S&P 500 indicated nothing other than we all need to wait until this week to see which way the market will break: to new highs or into a correction.

There are dozens of other technical indicators saying different things right now, from Elliott Wave to you name it. I’m not going to make a list because it doesn’t really matter. Do a search of the web for various indicators, go towww.stockcharts.com and try to guess which indicator is right. That’s all you can do. Guess. Not a great investment strategy.

As I’ve mentioned repeatedly, fundamental measures of risk continue to rise: price to earnings ratios are getting worse as earnings sink, aggregate demand growth globally is lower than in decades past and shows no sign of rebounding, debt issues continue to permeate and demographics won’t change from negative to neutral for many years. Event risk also appears to be at a very high level, though that is largely subjective and open to argument.

Technical analysis is supposed to analyze past trends and apply to the present. Unfortunately, much of that analysis has been done wrong for decades or at least without significant substantiation. Today, we face the new investing world of algorithmic trading on top of the central bank manipulation.

Quantitative trading seeks to find inefficiencies in the markets that can be exploited. The algo programmers know what the technical indicators are and write programs to defeat the analysis that many are utilizing. The quant hope is that those inefficiencies last long enough to make a profit trading against.

In the short term though, technical and quantitative traders are fighting it out. Technically, the S&P 500 should have a correction to at least the lower 1800s – where it has gone a few times since 2011, possibly to the lower 1700s, which is longer terms support and maybe even the 1600 range I have targeted due to international factors.

The quant traders however must see some inefficiency in the technical conclusion though. What could that be? I have thought about this for some time. I think it has something to do with the fact that there is so much monetary stimulus still floating around on a delayed basis, as well as, from Europe at the moment, that rather than seeing a broad-based correction, we are seeing a rotating correction because there is enough money to invest available to support at least some bids.

The question becomes, how much money is there to support at least some bids? I don’t know, however, I would suggest it is not as much as people might hope. In a world becoming immune to QE, ZIRP and now NIRP, the fundamental realities are slowly creeping in. And the fundamental reality is that corporate profits have peaked at least in the intermediate term and that aggregate demand growth, which is needed for another leg up in corporate profits, is simply not strong enough.

The big idea I would want my subscribers to wrap their heads around is this: slow growth forever is real. Adjust to it. Trying to trade the battle between much better equipped computers, programmers, piles of money and trading houses is just not a winning battle. Sure, we have a small hedge in place and I have discussed how to speculate on a deeper correction, however, the bottom line is that the easiest thing to do is sell into the rallies to accumulate cash, continue to double check our “short lists” in stocks and ETFs, and wait for compelling opportunities.

“The stock market is a no-called-strike game. You don’t have to swing at everything – you can wait for your pitch. The problem when you’re a money manager is that your fans keep yelling, ‘swing, you bum!'” more Buffett

We do not need to swing at every pitch in a market that is not clear. Eventually, we will get our straight pitches down the middle of the plate, that’s when we’ll swing, probably multiple times. It is very likely, that we have another August 24th, 2015 type day this summer sometime when we buy 10 stocks and a few ETFs again, all at once.

“Opportunities come infrequently. When it rains gold, put out the bucket, not the thimble” Buffett again

“You do things when the opportunities come along. I’ve had periods in my life when I’ve had a bundle of ideas come along, and I’ve had long dry spells. If I get an idea next week, I’ll do something. If not, I won’t do a damn thing.” of course, Buffett