Before I start, let’s remember our asset allocation approaches and what applies to each of us. From the “Getting Started” report “Intelligent Asset Allocation: Better Returns & Lower Risk.” 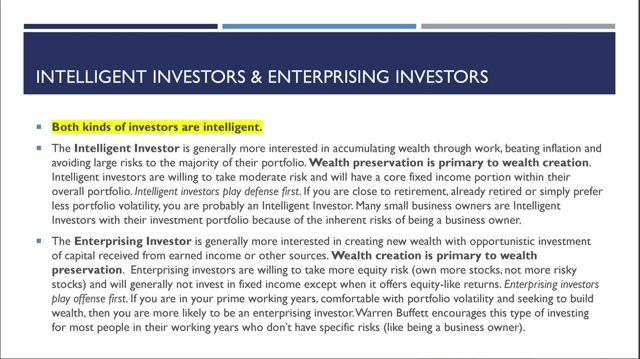 I am clearly an enterprising investor. However, I think hedging a portfolio is for either type of investor. A small short position (we buy puts, we don’t use margin) can reduce risk for the Intelligent Investor who is exposed to equities. The Enterprising Investor might want to buy a slightly larger put position and speculate on a trade gain.

We can say all we want about snotty attitudes and world wars, but Europe is a great place. However, their demographics, debt loads and a half-assed approach to the EU have doomed them to #slowgrowthforever (Google it).

Despite their problems, the ECB has been very successful in propping up Europe. Here’s what I said back in August:

“Europe though is rallying. I don’t believe the hype in Europe as it is QE linked. I prefer buying U.S. stocks for about 75% of my equity asset allocation, with the rest in emerging markets like India.”


If you are watching Europe, then you know there is a lot of angst about unwinding QE in Europe. Inflation is not what they want it to be and growth is not speeding up quickly.

In fact, growth is not speeding up anywhere. So, how do you unwind QE and keep growth expectations? The answer is that you don’t. Eventually the world is going to have to acknowledge and adjust to the “slow growth forever” reality. When that adjustment happens, and I expect it by 2020, we will see our next “big one.” 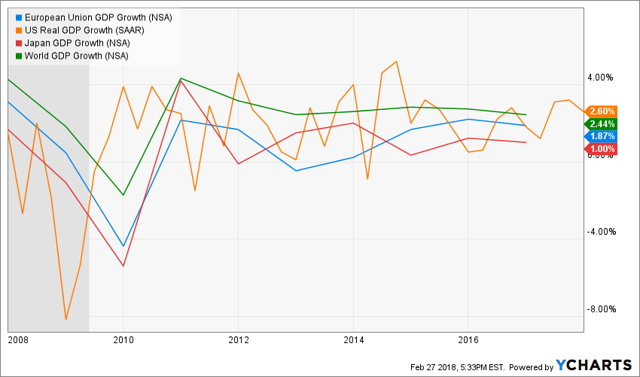 As you see, EU GDP growth is 1.87% plus or minus for the next adjustment. Global GDP growth offers very little in the way of a pull effect as it is not that high either. In fact, it is interesting, and should be very interesting, that the developed U.S. is stronger than the World GDP growth which is supposedly filled with high growth international nations. Hmmmph, that’s something to think about isn’t it.

Here’s a few recent articles regarding Europe and their QE unwind:

QE may need to continue a little while yet, ECB economist warns

Investors Are Scared, And ECB’s Not Even Close to Unwinding QE

And here’s Ray Dalio, whom I agree with on a lot of topics right now. This interview covers more than Europe, but all are topics I have or am about to touch on.

My takeaway is that Europe has to make a decision between maintaining a bit of growth and keeping their purchasing power strong. Here’s the big problem for Europe, and think about Greece and some other stressed countries: how do they square defending the currency with keeping growth high enough in the weaker nations where they are desperate for jobs and income?

I don’t know if there is an easy answer, as evidenced by the fact that they never really solved the Greece issue. I think the answer lies in having both the Euro and local currencies, but how long will that take to figure out?

Ultimately, Europe is high debt and slow growth without the conformity of Japan which faces the same problems. I think the Europeans have to defend the Euro as China penetrates international currency markets and the U.S. Federal Reserve appears to be turning more hawkish. Their hope will be that growth continues to push towards 2%. They will be very disappointed.

Dalio’s Bridgewater has famously now taken out a huge short position in Europe.

It’s Dalio Versus Everyone Else as Money Flows to Europe

Dalio has cited Italian elections and general political structural angst in Europe among reasons to be short. He has also said the growth and inflation are essentially fine. So, why the short? It’s surely not purely based on political structure.

Many of the companies that Bridgewater has bet against have substantial earnings from outside of Europe. This would imply that the reasoning behind Dalio’s bet is that he does expect the Euro to rise making European products less competitive abroad. That is largely my reasoning for going short as a hedge against a peaking global economy and changes in currency regimes.

What could really support the bet is that foreign money, hot money, has been flowing into Europe. When, if, the Euro rises, there could be an exodus of that same hot money.

Germany stands to be a big loser if growth slows due to a rising currency. The demographic risks in Germany are also among the worst in Europe. For those reasons I am betting against the iShares MSCI Germany ETF (EWG). For those experienced with margin, you can certainly use margin for a pure short. I am buying puts to limit my exposure to being wrong.

Italy has elections this weekend that could throw the nation into uncertainty. I do not think we are talking destroy the EU type stuff, but rather another step in the process of fixing what ails Europe. As I said, that will be a long, slow, angry process.

Italy also has tremendous demographic problems, tax collection issues and slow growth. I am betting against the iShares MSCI Italy ETF (EWI). For those experienced with margin, you can certainly use margin for a pure short. I am buying puts to limit my exposure to being wrong.

I am also shorting the broader European complex (again short used in general, as I don’t use margin due to risk factors) with the SPDR Euro Stoxx 50 ETF (FEZ). For those experienced with margin, you can certainly use margin for a pure short. I am buying puts to limit my exposure to being wrong.

Additional disclosure: I own puts on EWG, EWI and FEZ. I own a Registered Investment Advisor, however, publish separately from that entity for self-directed investors. Any information, opinions, research or thoughts presented are not specific advice as I do not have full knowledge of your circumstances. All investors ought to take special care to consider risk, as all investments carry the potential for loss. Consulting an investment advisor might be in your best interest before proceeding on any trade or investment.